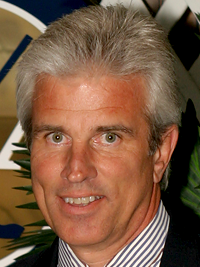 
Mark is from Edmond and is a lifetime golf professional. He is a PGA member and is a former president of the South Central Section. Mark was the head professional of Twin Hills G&CC from 1989-2002. He started with the Oklahoma Golf Association in 2002.

Jay has been a member of the PGA for 23 years and is responsible for the Handicap Services and Course Ratings in Oklahoma. He grew up in Seminole and has been in the golf industry all of his life. He has been with the Oklahoma Golf Association since 2001.

Morri has promoted Junior Golf in the state of Oklahoma for many years following a 32 year career in education adminstration. Founder and the director of the Oklahoma Junior Golf Tour for the past 11 years. Morri has been with the Oklahoma Golf Association since 2010.


Bob is Director of Rules and Competitions and was appointed to the PGA of America’s Rules of Golf Committee in 2016.   He earned Bachelor’s and Master’s degrees from the University of Central Oklahoma and has been a member of the PGA of America since 1989.   Bob has officiated at numerous events for the PGA of America including the Senior PGA Championship, the Women’s KPMG Championship, The PGA Professional Championship, the Senior PGA Professional Championship, the PGA Junior Boys and the PGA Junior Girls Championships. In addition, Bob has officiated at events for the USGA, Oklahoma Golf Association (OGA), American Junior Golf Association (AJGA) and other local and regional golf associations.   He has presented on the rules of golf numerous times to the PGA South Central Section, Oklahoma high school coaches, high school and college golf teams, and taught the rules of golf to students in the UCO PGA Golf Management Program.  Bob has attended approximately a dozen PGA/USGA Rules of Golf Workshops achieving exams scores over 95 on multiple occasions. 
Dane is from Oklahoma City and is a graduate of the University of Central Oklahoma Golf Management program.  He is the director of all USGA Qualifying events in the state of Oklahoma. He is also a member of the PGA and has earned expert certification in the Rules of Golf.

OGA Board of Directors

Joby Wood lives in Tulsa with his wife Jennifer and their son and daughter.  He grew up in Memphis, TN, and graduated from Vanderbilt University in 1991.  He and his wife own and operate a metals distribution company.

Joby has been a member at Tulsa Country Club for almost 10 years, and was very involved with the recent renovation to the course and clubhouse.  He has lived in Tulsa for 20 years, and has served on many boards and committees.

Jim is a PGA member and currently the Tournament Director of the Folds of Honor. He is a former PGA tour player and and extremely accomplished player having participated in the PGA Championship and US Open. Jim has also been the South Central Section Senior Player of the Year in 2011 and 2012.

Jim has been a member of the OGA Board since 2006.

Heath Myers resides in Kingfisher with his wife Jill and son Graham. He graduated from Oklahoma City University in 2006 and is Vice President of Myers Real Properties.

Heath currently serves on the board of Kingfisher Regional hospital and also Kingfisher Lions Club. He has served on the Kingfisher Chamber of Commerce board as well as Kingfisher Golf Club board of directors.

Charles Holland lives in Oklahoma City with his wife Christy and their three daughters.  He graduated from Oklahoma State University in 1973 and is a Commercial Lender for BancFirst.  He was taught to play golf by his father 53 years ago.  He has been a member at Twin Hills for 29 years.

Jack is a lifelong Tulsa resident and has a masters degree from Louisiana State University. Jack has been employed by the F&M Bank and Trust Company of Tulsa for the past 27 years. He has served on many boards and committees in the Tulsa area including PGA Championship commitees and the American Cancer Socitey.

Debe Hauschild is a member of Oak Tree National Golf Club and Seven Canyons in Sedona.  She holds a BBA from the University of Oklahoma and is presently a “self-titled” Asset Manager, Community Volunteer and has a passion for the game of golf, especially The Rules.

A few of her past community board positions have been with the Junior League of Oklahoma City, Edmond Women’s Club, Camp Barnabas, Oklahoma Children’s Cancer Association, Heritage Hall Patrons and is a member of Leadership OKC Class XXII.  Her golfing background includes dozens of officiating assignments and presentations of Rules of Golf workshops.  She is a former member of the USGA Regional Affairs Committee, WOGA Board and has volunteered for several national golf tournaments held in the metro area.

Presently she serves on the boards of The First Tee of OKC, Centennial Loft Owners and Oklahoma Golf Association.  Debe resides in Edmond with husband, Rick and enjoys frequent trips to their home in Sedona, AZ.